My client David Leone was a guest at the Days Inn hotel in Springfield, Missouri on January 14, 2013. He had just arrived at the location dropped off some luggage and was going back out to his car. As he exited the Days Inn he walked to the left, stepped off the curb and there slipped on black ice and fell.

He landed hard on his right side. He laid there for a period of time and then was able to get up and crawl/stagger back into the front of the hotel. He told the manager at the time what had happened.

David then went up to his room and laid down. David did not have health insurance, so he did not go to the emergency room or urgent care. David took pictures and video of where the incident occurred the next day which showed the melted water and where the ice patch was.

However, this was an unwitnessed slip and fall and he did not get any medical care for four days. Here’s where he fell: 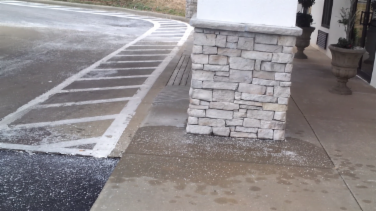 We filed suit and litigated the case.  We took the deposition of the owner of the Days Inn and worked hard to establish liability.  The challenge was that it was not witnessed and there was not sufficient snow or ice to freeze.  There had been precipitation the night before but it had melted and evaporated.  We took the deposition of the defendant’s representative and established liability.

The owner, eventually said he knew an ice patch could develop there and had seen it in the past. This was not a natural accumulation of ice. Rather, it was melting and refreezing. The ice from the roof of that area melted and dripped on forming a new ice patch on the ground. There were no gutters there.

But David had a third surgery – a total hip replacement three years after the fall and a month before our mediation in the case.  David had complained of hip pain from the fall and was diagnosed with acetabular dysplasia in the hip and a partial tear of the gluteus minimus, from the fall.

Plaintiff had $96,000 in billed medical expenses in this case at mediation.  We made a detailed presentation on liability at mediation, but the challenge was connecting the medical care that had occurred so long after the incident. We were ultimately successful in mediation and settled the case for $250,000.  We think this a tremendous settlement in such a case.